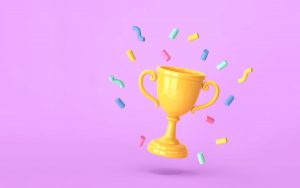 The enriching experiences and successes that come out of the TECHNATION Career Ready Program are impressive. Students often dig into fascinating projects and initiatives that produce meaningful results for employers and their clients. And along the way, students have a chance to put their skills to use, sometimes discovering new talents and unexpected career path options.

Career Ready employers notice the students who take initiative, display leadership and drive forward complex projects, and we are excited to recognize the best of those students with the TECHNATION Career Ready Awards. Here’s how the most recent award winners stood out from an impressive pack of talent.

When Coder Sports Academy founder John Downing was diagnosed with metastatic cancer in January 2021, it was looking like his young company would need to close. With a staff of part-time employees and co-op students, there was no obvious choice for an interim leader, and John wasn’t even sure he could pay someone to work full-time. But Harrison Lee stepped up. A student in the Computer Programming Technologist program at Algonquin College, Harrison’s placement was subsidized through TECHNATION’s Career Ready Program, which made full-time hours financially feasible.

In a matter of weeks, John went over every aspect of the business with Harrison, setting him up to take over the business that teaches kids how to code. Once John began aggressive treatment, Harrison was fully responsible for managing the staff, other co-op students and hundreds of kids enrolled in the coding and math enrichment programs Coder Sports Academy offers.

“Harrison worked tirelessly,” John wrote in his nomination. “His extraordinary natural leadership and technical excellence allowed the business to not only survive—but grow.” In fact, John returned to a flourishing business, with a new math education program, more kids enrolled in the after-school program and an expanded staff.

Harrison’s leadership in a time of crisis exemplifies what it means to go above and beyond and lead the way in an organization, and he was deeply deserving of the TECHNATION Career Ready Leadership Award.

The TECHNATION Career Ready Tech Wiz award is given to a student who goes above and beyond in their work plan and skills needed to seamlessly implement technology or build things behind the scenes—and it’s easy to see why Gabe Sher is the most recent recipient of this award.

During his four-month software engineering internship at Ribbit—a start-up that is developing “pilotless” autonomous airplanes to deliver goods to underserved regions—Gabe spearheaded the development of a ground control station for a self-flying airplane. The station allows engineers on the ground to monitor flights over radio and cellular links from taxiing and takeoff to the flight and landing, and Gabe took it from concept to building and testing in just four months. It’s now an essential component of the company’s future aircraft test program.

Not only did Gabe bring years of coding skills to Ribbit, he was also a quick on-the-job learner. He picked up ROS (Remote Operating System) in a matter of weeks through self-guided learning, familiarizing himself with the technology despite having no prior background in autonomous vehicles. “His code is designed with functionality, readability and scalability in mind. He is a top-tier early career programmer and future engineer,” Ribbit co-founder and COO Jeremy Wang wrote in his nomination. “Gabe fearlessly rose to every challenge we threw at him.”

It’s no wonder the company is hoping he comes back after his final year of studies.

It’s not difficult to see why we’ve recognized Alex Dimitrakopoulos as a rising star in the B.C. region. The University of British Columbia student has been working closely with researchers at UBC’s Quantum Matter Institute on rapid prototyping of a new device that’s being developed.

This TECHNATION Career Ready work experience has given Alex an opportunity to employ his skills in various areas of engineering, including mechanical design, electrical design, vacuum systems and particle beam systems, and he’s utilized his CAD skills and expertise with a range of fabrication tools, including the lathe, milling machine, laser cutter, waterjet cutter, 3D printer and welding equipment. But it’s not just Alex’s technical knowledge and skills that impressed the research team—his inquisitive, analytical mind has been invaluable when it comes to brainstorming new solutions and looking at problems from many angles.

“Alex’s technical contributions have played a major role in the success of the project,” Professor Alireza Nojeh and Research Engineer Casimir Kuzyk wrote in their nomination. “Alex has great intellectual capacity and demonstrates a depth of thinking and maturity that are not what one typically expects at the graduate level.”

Tiffany Heinrichs was taking initiative even before beginning her Career Ready work placement. ActionEdge Business Coaching didn’t have any job openings, but Tiffany reached out and explained how she would be an asset to the Calgary-based business coaching firm. She was put to work assisting with documentation, event logistics support and process mapping and even project ownership.

In her time at ActionEdge, Tiffany developed a TV show that is set to air in Canada next year, implemented two client feedback initiatives, built a sales process for a new division of the company and more.

“Perhaps the most impressive thing about Tiffany’s leadership qualities and actions is how she always loops the team in at every stage,” Managing Partner Jarrod Stanton wrote in her nomination. “Even though she moves faster, with more conviction and intentionality than most, she is constantly updating everyone along the way to ensure her pace and massive action do not leave a trail of confusion and questions, but rather [provide] confidence and assurance that her projects will be implemented and adopted as simply as possible.”

Tiffany’s initiative, professionalism and assertiveness make her a rising star who’s worthy of this recognition.

When Jusleen Sahota began her work placement at Rydel Roofing Oakville, she was tasked with tech and administrative duties, and she not only excelled in these areas, she also discovered an affinity and passion for sales.

She took the initiative to learn both sales theory and technical roofing knowledge, and in a matter of months increased her closing rate to 40 per cent from her initial 15 per cent. She also recognized room for growth and proposed hiring new sales employees, and then coached the new hires. Rydel was so impressed with her sales and coaching skills, they kept her on in the role of Sales Coach following her placement.

Her exceptional performance is surely a reflection of her attitude towards work—she looks forward to broadening her skill set and taking on new tasks,” Rydel’s Andrew Cox wrote in her nomination. “By seeking out new opportunities wherever possible, Jusleen has grown from not only working in tech and administration, but as well taking on the role of sales coach.”

When Pierre Gregoire began his internship in C++ programming at Moveck, it wasn’t long before he found his place in the team. Quebec City-based Moveck designs highly customizable tools that allow researchers to process data from motion capture technologies—think biomechanics studies involving sensors placed on the body—and Pierre was working on development for a computation engine.

Pierre dove in, improving the display of patient information to make analysis and interpretation of data easier for researchers and clinics using the software. He also took initiative, asking to work directly with the calculation engine to better understand the operations performed on data. His work led to the ability to calculate and represent results in real time, which can help health care providers pinpoint the cause of an issue—pain, for example—more quickly.

“Some patients may have significant pain, [and] being able to quickly analyze acquisition data is essential in the clinical analysis,” Moveck programmer Fabien Raspail wrote in Pierre’s nomination. “Pierre easily collaborated with the other members of the R&D team and contributed to a new innovative module used in research and in walking clinics.”

Between his understanding of the challenges clients face and his contribution to improving the user experience, Pierre stands out as a rising star in the Quebec tech sector.

As a summer Education Intern with Science East, a science centre in New Brunswick, Mallory was hired to assist with camps throughout the summer, but she quickly showed an aptitude for leadership. In addition to leading the camps, which included planning, facilitating, evaluating and managing other summer students, she took on a video project for the Early Childhood program, organizing staff to create three videos in English and French for summer programs, as well as additional videos for use in the fall.

“Mallory has shown great maturity,” Science East Early Childhood & Programs Coordinator Rebecca Boone wrote in her nomination. “Any task given to her is completed above and beyond the expectations, and she is one of the main role models for other staff members.”

Mallory’s strong leadership and teaching abilities made her a stand-out choice for a rising star in the Maritimes.

Find out how you can gain incredible work experience with the Career Ready Program.