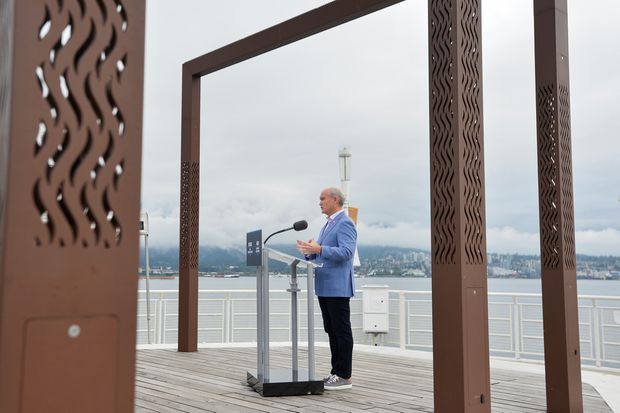 During their six years in power, the federal Liberals positioned themselves as champions of innovation with a Prime Minister who courted foreign tech giants, rubbed shoulders with domestic startup CEOs and could riff about quantum physics.

But this election campaign, the Conservatives under Erin O’Toole are trying to take the lead with an innovation platform that is more extensive and responsive to the tech sector’s demands than the Liberals – a big change from the party’s past indifference.

The Tories’ platform even uses the term “innovation,” or its derivatives, the most of the three major parties: It appears 51 times in their platform, compared with 40 for the Liberals and just 14 for the NDP in a platform that is short on specifics regarding innovation.

“The Conservatives definitely have the most coloured-in platform in terms of what they would do,” said Ben Bergen, executive director with the Council of Canadian Innovators (CCI), a lobby group that represents fast-growing Canadian technology companies. He added that the Liberals’ “zeal for the innovation file is somewhat diminished,” its platform marked by “incremental improvements” on past initiatives.

But over all, proponents of the innovation sector are underwhelmed. They say campaign promises don’t adequately address the country’s dated approach to innovation policy, which has left Canada trailing other jurisdictions including the United States, China, Europe and Britain in capitalizing on a sector that is transforming the global economy.

“The real problem Canada has is that we don’t innovate,” said Dan Breznitz, co-director of the University of Toronto’s Innovation Policy Lab. “Our startups are one of the only bright spots. We have as a government and as a country almost zero capacity for long-term planning and strategic vision, which is especially important with regards to innovation.”

The two leading parties have made several similar promises. Both the Liberals and Conservatives pledge to create a research institution modelled on the U.S. Defence Advanced Research Projects Agency (DARPA), which funded the creation of GPS and the internet. The Liberals have pledged $2-billion for their “CARPA,” while the Conservatives version would spend $5-billion. Skeptics think it will be the latest in a line of Canadian innovation programs that fail to deliver.

Even the idea’s main proponent, Robert Asselin, vice-president of policy at the Business Council of Canada and an ex-Liberal economic adviser, says other countries have failed in attempts to emulate DARPA and that a Canadian version “requires careful planning and thinking, and if this is politicized or bureaucratized, it will almost certainly fail.”

The Liberals promise to cut red tape and reduce the need to use consultants to navigate the process to apply for the tax credit for R&D employee costs. The Conservatives go further, saying they’ll streamline the “badly broken administrative nightmare” and move the program’s administration to the Innovation, Science and Economic Development department, which sets industrial policy, from the Canada Revenue Agency.

Both parties say they’ll tax foreign tech giants; move forward with “open banking” initiatives that make it easier for consumers to share their data between financial institutions, including startups; and expand broadband internet to rural areas.

While the Liberals pledge to deliver on past promises to fund artificial-intelligence and quantum-computing sectors, the Conservatives would expand on the past government’s intellectual-property strategy, promising to cut the cost for startups to secure patents and ensure IP created in Canada is better protected from foreign takeovers.

The Conservatives, unlike the Liberals, state Canadian taxpayer dollars should not fund foreign technology companies – and that if those companies acquire Canadian patents, they should repay any public dollars that went into the creation of that intellectual property.

The Conservatives “seem to have more detail around what they’d do” on innovation, said Angela Mondou, chief executive officer of Technation, a Canadian lobby group that represents foreign and Canadian tech companies. But she added that the parties’ promises amount to “a bunch of tactics in a war zone without an overarching plan” to create growth and jobs. Canada still lacks “a significant, nationally cohesive data strategy,” she said.

Innovation commentators have long complained about a lack of sophistication and strategic thinking in Ottawa. They’d like to see key parts of government cohesively devise and implement plans to leverage the country’s innovation sector and create economic growth, operating with a long-term view. “That’s what every successful innovation economy does,” Mr. Bergen said.

Jim Balsillie, former chairman and co-CEO of BlackBerry and chairman of the CCI, said too much of Canada’s innovation funding ends up “making foreign countries richer at Canada’s expense” because decision makers don’t understand that attracting the likes of a Google to expand in Canada has a different impact than an auto plant or steel mill, since valuable IP and data their Canadian-based workers help create “are commercialized and taxed outside Canada.”

Canada, he said, has failed to realize the importance of owning IP and controlling data. Canadian governments let foreign companies hoover up foundational AI technology created here and allowed China’s Huawei to strike research partnerships with Canadian universities to develop strategically important, taxpayer-funded 5G technology and transfer it out of the country.

Mr. Balsillie said Canada’s approach to trade is mired in 20th-century thinking; recent trade agreements haven’t been primarily about tariffs but establishing market frameworks that benefit existing owners of data and IP, increasing costs for net importers of IP such as Canada.

“We need a prosperity strategy attuned to how today’s economy works. That starts with building a critical mass of expertise inside the government of people who understand the structural economic issues raised by the major trends of our age,” Mr. Balsillie said.

“The reason we need this … is not just to stop launching half-baked programs but because the role of government in the post-COVID world is going to expand.”

Governments have offered up programs for years that plugged holes or fixed urgent problems – by funding venture capitalists hurt by the credit crisis, or AI institutes aiming to keep researchers here.

There were flagship programs that came across like big shiny exercises in cheque-writing: The Liberals’ $950-million “supercluster” program was a top-down project intended to spur economic development in five key sectors. But data and IP strategies were afterthoughts, and the program was slow to start and isn’t mentioned in the Liberal platform.

In addition, the Strategic Innovation Fund, like the past corporate welfare programs it replaced in 2017, bankrolls a lot of the usual suspects in autos, aerospace and manufacturing, as well as several Canadian startups. It has also provided tens and even hundreds of millions of dollars to profitable foreign companies such as MasterCard, ArcelorMittal Dofasco, Sanofi Pasteur and Nokia.

The fund got a major top-up in the Liberal’s April budget, including an additional $5-billion over seven years earmarked for a “Net Zero Accelerator” aimed at supporting private-sector investments in clean technology.

Both parties’ industrial-policy plans are heavily tilted toward low-carbon technology, with the Conservatives promising to funnel billions of dollars into the electric-car, hydrogen and small nuclear-reactor industries – all sectors the Liberals have targeted for government largesse.

The Liberal government did make it easier for fast-growing technology companies to quickly bring in foreign workers for high-skilled jobs; more than 3,200 Canadian companies have used the program to hire more than 40,000 employees.

But the global war for tech talent is once again emerging as an immediate challenge for the sector. The Information and Communications Technology Council forecasts 2.26 million people will work in digitally skilled positions by 2025 – about 250,000 jobs short of demand.

Canadian companies are struggling to fill jobs; with the pandemic’s shift to remote work, it’s easier than ever for Canadians to work for foreign companies without leaving their kitchen. Reading the party platforms, you’d never know it’s a pressing issue – but it will be for whoever wins.

“The key issue we deal with, and it comes up every day at every board meeting, is talent,” said Michelle McBane, managing director with Toronto venture-capital company StandUp Ventures, which has backed 15 Canadian startups.

“Anything that opens the doors to make it easier for anyone to come to Canada, doubling down on the startup visa program, whatever that would look like, is really important.”