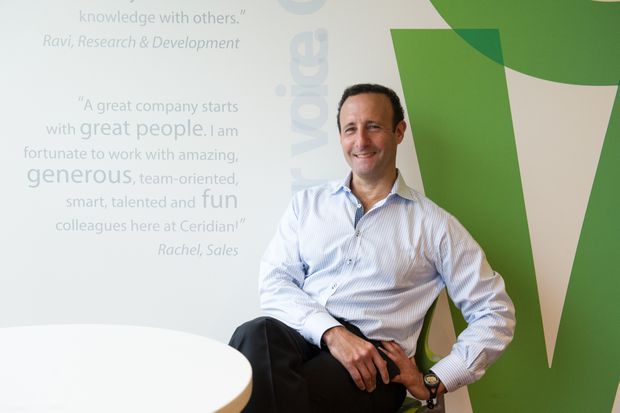 Ceridian HMC Holding Inc., which is based in Minneapolis but led from Toronto by chief exectuive David Ossip, was awarded an eight-year, $16.9-million contract to start replacing Ottawa’s failed Phoenix payroll system.
GALIT RODAN/FOR THE GLOBE AND MAIL

The federal government has awarded a key contract to start replacing Ottawa’s failed Phoenix payroll system to a leading maker of human-resources software that was developed in Canada.

Ceridian HCM Holding Inc., CDAY-T which is based in Minneapolis but led from Toronto by chief executive David Ossip, said that under the eight-year, $16.9-million contract, it will run a pilot project to move four government departments, starting with Canadian Heritage, to its cloud-based human-resources software platform, known as Dayforce.

After that, “it’s expected that additional departments follow” by moving their payroll processing to the Dayforce system, Mr. Ossip said in an interview. He described the contract as part of “a multidecade partnership and collaborative effort” with the government. “Obviously we expect to be very successful and to solve the government of Canada pay challenges, because that’s what we do.”

The move is the latest attempt to fix payroll for the federal public service, which blew up with the botched implementation of the Phoenix system in 2016. Phoenix, one of the government’s largest internal information technology procurements, caused thousands of public servants to be overpaid, underpaid or not paid at all, and forced many of them into deep debt.

Problems with the system still linger. According to the most recent figures from the Public Service Pay Centre, as of Aug. 18, there was a backlog of 115,000 pay transactions beyond the normal workload that needed to be processed.

The new contract for Ceridian is a significant win for Mr. Ossip, a veteran, South African-born Canadian software entrepreneur who began building Dayforce as a Toronto-based startup in 2009, and sold it to Ceridian three years later. At the time, the buyer was a faded technology has-been that started life as an IBM unit in 1932 and was purchased by U.S. private-equity giant Thomas H. Lee Partners in 2007. Part of the deal was that Mr. Ossip would become CEO of Ceridian.

He subsequently built Ceridian’s effective headquarters and executive team in Toronto, where much of the development work happens. Mr. Ossip shifted Ceridian’s focus to expanding Dayforce, which offers payroll and other human-resources services, including benefits, and work force and talent management administration on a single platform. Ceridian’s Dayforce Wallet service allows shift workers to get paid on demand; 600 employers have signed up for the innovative offering.

Ceridian went public on the Toronto and New York stock exchanges in 2018 at US$22 a share. The share price has nearly quintupled since, giving the company a market capitalization of close to US$16-billion.

In 2018, Mr. Ossip led a push for Ceridian to help Ottawa move beyond the botched implementation of Phoenix.

Public-service unions made the replacement of Phoenix a high priority. Debi Daviau, president of the Professional Institute of the Public Service of Canada, welcomed the new contract with Ceridian. “We’re moving away from the way Phoenix was rolled out and towards a system that will work ‘as advertised’ because it will be fully tested before it reaches public servants,” she said in a statement.

Ceridian’s prospects were promising from the outset, as the government asked for bids from software firms, not systems integrators such as IBM. Ceridian launched a public-affairs campaign, lobbying the government to consider Ceridian over established tech giants that had won Ottawa’s business for years.

“The best way the government can support its innovation agenda is to help Canadian innovative companies,” Mr. Ossip said. “It’s always been a challenge to get procurement support. I’d love all governments in Canada, like other countries do, to allocate a percentage of their budget to Canadian innovative companies. If they did, you’d spawn many billion-dollar organizations from Canada.”

The charm offensive worked. In June, 2019, the federal government announced that Ceridian and foreign giants SAP SE and Workday Inc. had been short-listed to provide the Phoenix replacement. A month later, Ceridian hired Gianluca Cairo, chief of staff to then innovation, science and economic development minister Navdeep Bains, to oversee a new division to expand its offerings to public-sector clients worldwide. Ceridian now has hundreds among its 5,160-plus customers.

Mr. Cairo took the job after being cleared by Federal Ethics Commissioner Mario Dion. Ceridian said in a statement Mr. Cairo “has at all times respected his post-employment obligations related to his service in the federal government. He has no involvement in any matter on which he worked while a public office holder.”

Ceridian has known for weeks it won the bid, but the news was subject to “blackout periods with regard to the election,” Mr. Ossip said. He said the government “didn’t want it to be viewed as anything to be influenced by the election” and added the timing and award “had nothing to do with the political environment.”

Shared Services Canada, the government’s central IT department, said in an e-mail it looks forward to working with Ceridian in the next phase of the payroll project. It said the contract decision was made by the department, not Liberal cabinet ministers.